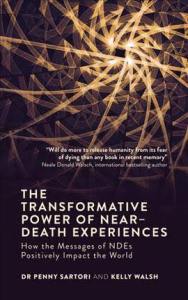 The Transformative Power of Near-Death Experiences

How the Messages of NDEs Positively Impact the World

About 3 years ago, a woman named Kelly Walsh from the UK contacted me and told me about a spiritually transformative experience she had following her suicide attempt, from which she woke up exclaiming like-minded souls would collaborate to change the world!

Not knowing exactly what that meant nor what it had to do with her, she began searching the internet for others who had glimpses into other realities, especially near-death experiencers. Along the way she came across Dr. Penny Satori, a nurse in the UK who researched near-death experiences among her patients for her PhD and just released her book “The Wisdom of the Near-Death Experience,” and she had just had a baby, when Kelly approached her with the idea for another book. She gave Kelly the task of finding the “like-minded souls” and that’s how she found me and about 20 others whose stories of transformation are now available in this November 2o17 release The Transformative Power of Near-Death Experiences: How the Messages of NDEs Positively Impact the World by Dr Penny Sartori and Kelly Walsh (Watkins).

Foreword by Dr. Mick Collins, author of The Unselfish Spirit

Prologue by Neale Donald Walsch, author of the Conversations With God series

Each of us “like-minded souls” have done some amazing spiritually-guided work individually following our transformative experiences, which we each write about in our chapters (I am Chapter 10), and the purpose of this book is to support a non-profit foundation our Positivity Princess Kelly set up to fund positive programs to help children around the world rise out of suffering and poverty… a collaboration to change the world.  ALL royalties from the book go to the Love Care Share Foundation. The first project involves building a school in Cambodia.

“A comforting portrayal of the infinite healing power of love, and the sense of connectedness with the universe that arises from such profound experiences.” —Eben Alexander, MD, neurosurgeon and author of Proof of Heaven and The Map of Heaven.

“The Transformative Power of NDEs has the power within its pages to open the hearts minds and souls of every person that reads it.” —Anita Moorjani, NDEr and New York Times Best Selling Author of Dying to Be Me.

The Transformative Power of Near-Death Experiences

How Messages from NDEs Positively Impact the World

After you read the book, PLEASE go back to amazon.com or your favorite bookselller and write a review (it will help increase book sales with all royalties going to fund programs to help children around the world through the Love Care Share Foundation.